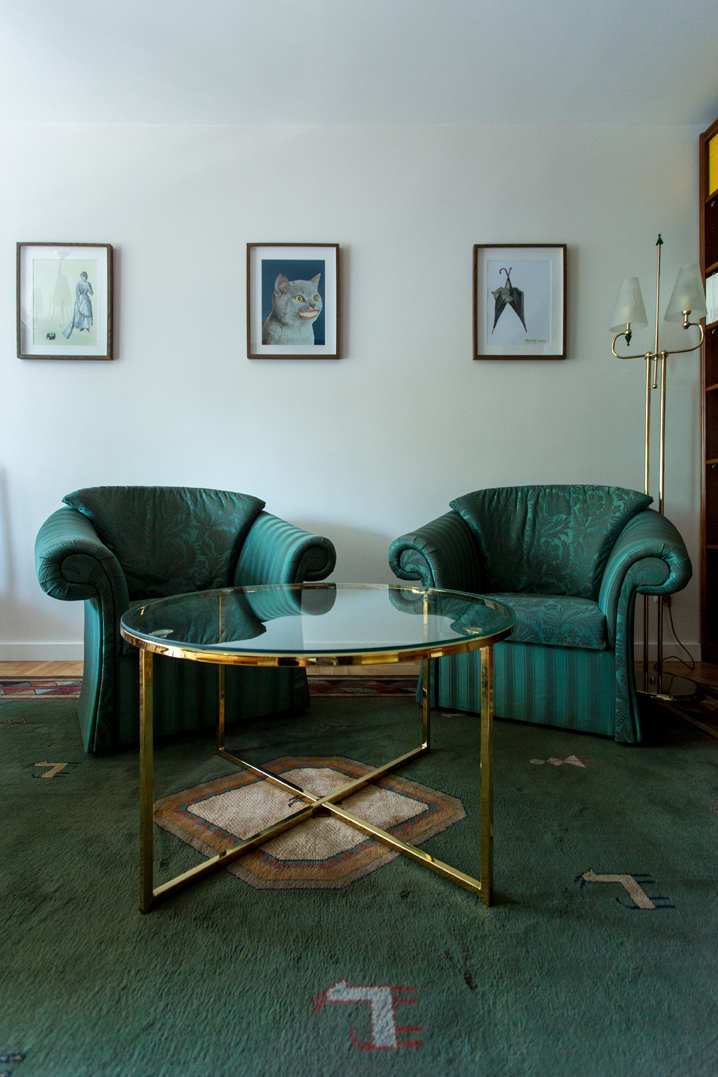 Szymborska moved to the flat at ul. Piastowska after receiving the Nobel Prize. It is situated in a quiet and green part of Kraków, well communicated with the city centre. It is not far from Park Jordana and Kraków Commons, with access to cycle ways and strolling paths.

The flat has undergone thorough renovation in 2019. The living room has retained its original decoration, complete with the furniture used by Szymborska – her bookshelves, armchairs, table, lamps, and trinkets. All the other rooms have been refurnished after renovation. Blow-ups of the manuscripts of Wisława Szymborska’s poems decorate the walls of the bedrooms.

An account of how Wisława Szymborska chose this flat after receiving the Nobel Prize and made it her home is given by Professor Teresa Walas: ‘Szymborska bought it second-hand, inheriting some of the furnishings. To the dismay of the Siwczyńskis, the interior designers entrusted with appointing the new flat, she retained the black-and-white kitchen and uninspiring bathroom, which she regarded as unimportant, purely functional rooms. As for the rest, the specialists were given free rein, and their proposals were greeted with grace and sometimes enthusiasm. Szymborska’s criteria included a table for 10–12 people, a large number of bookshelves with room for breathing space, a comfortable divan bed with an appropriately modelled back rest to permit writing in a reclining position, and a large chest of drawers where her postcard collection would finally have a suitable home. And a window. She wanted to have a window in the wall between the kitchen and the living room, through which guests could be served directly with plates, cutlery and meals. This was how the flat on Piastowska acquired a reference, albeit one winged by colour, to the communist-era kitchen alcove and numerous canteens and lunch bars. And Wisława’s face framed by the green and turquoise windowpane would forever remain in her friends’ memory.

‘Years of lack of space made Wisława Szymborska a practical person who did not attach much importance to many things. But each of her homes bore her distinct hallmarks, visible in the selection of paintings on the walls (generally modern, mostly abstract, no portraits) and the collection of objects. They leapt out at guests suddenly, coming out from between books, settled on a shelf: absurd, poetic, crazy artefacts. Incredibly perfect embodiments of kitsch, but also tangible realisations of poetic tropes and rhetorical devices. It was also a world of surprises and traps: imitation grapes among real bunches, a wine glass with a fly sunken into the base, a ship that turned out to be a lighter, a fork with prettified teeth…’ (T. Walas, ‘Szymborska and Her Flats’, trans. Ben Koschalka, Nowa Dekada Krakowska, 6, 2014, p. 146)